Mysore, also known as Mysuru is one of the most famous tourist destinations in South India. In fact, it was the seat of power of the Wodeyar Kingdom of Mysore. The rulers of Mysore were instrumental in developing the city as an architectural showpiece for all to enjoy. A road trip to Mysore from Bangalore is every Bangalorean cherished childhood memory.

Tourists from all over India are attracted to the city’s rich architectural culture, gardens, and palaces. Mysore’s salubrious climate throughout the year is loved by all tourists. Mysore is a thriving centre for the production of superior incense, silk sarees, and sandalwood. The Magnificent Mysore palace is one of the World Heritage sites according to UNESCO.

Visitors from across the globe throng to Mysore to learn yoga from reputed practitioners of the craft. The city has a reputation for being one of the cleanest cities in India. This City of Palaces attracts millions of tourists for the annual Dasara celebrations. The nine-day festival signifies the victory of Good over evil. Devi Chamundeshwari is venerated on all these nine days, as the presiding deity of the city of Mysore.

Deepam Cabs recommend the following tourist hotspots in Mysore for a beautiful day trip from Bangalore.

Mysore palace is a three-story structure with elaborate marble tomes and a five-story tower.  A blend of Hindu, Rajput & Gothic styles makes this magnificent monument special.

The palace is set amidst a large garden, an arch with the emblem and coat of arms of Mysore. Festivities for the nine-day Dasara celebrations in Mysore start and end at the palace. A jumbo Savaree (elephant procession) of the Mysore Royals draws tourists from all over the world.

Additionally, Ambavilasa Palace is a spectacular private quarter of the Mysore Royals. Tourists will be amazed at the grandeur and lavish lifestyle of the Wodeyar family.

An architectural beauty, the palace contains a mosaic of beautifully crafted stained glass ceilings. Golden columns, captivating chandeliers with floral motifs are alluring for all who visit. 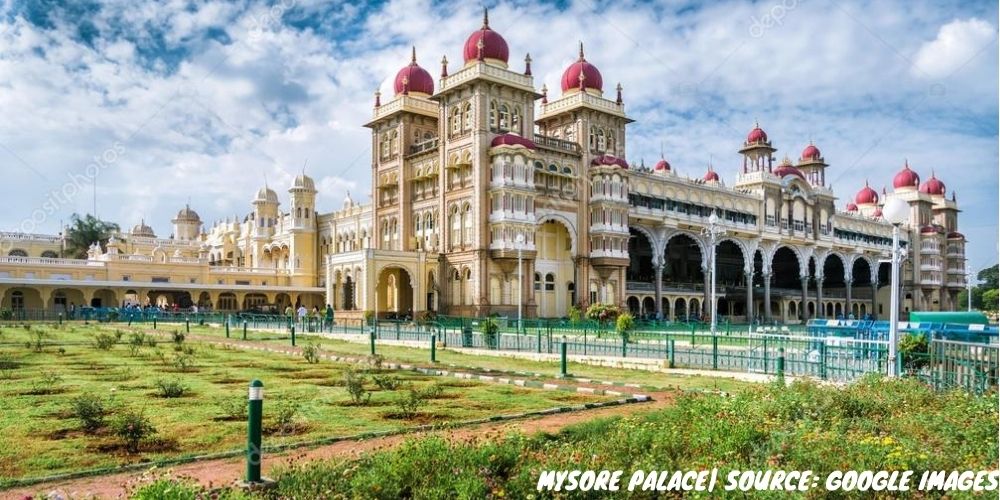 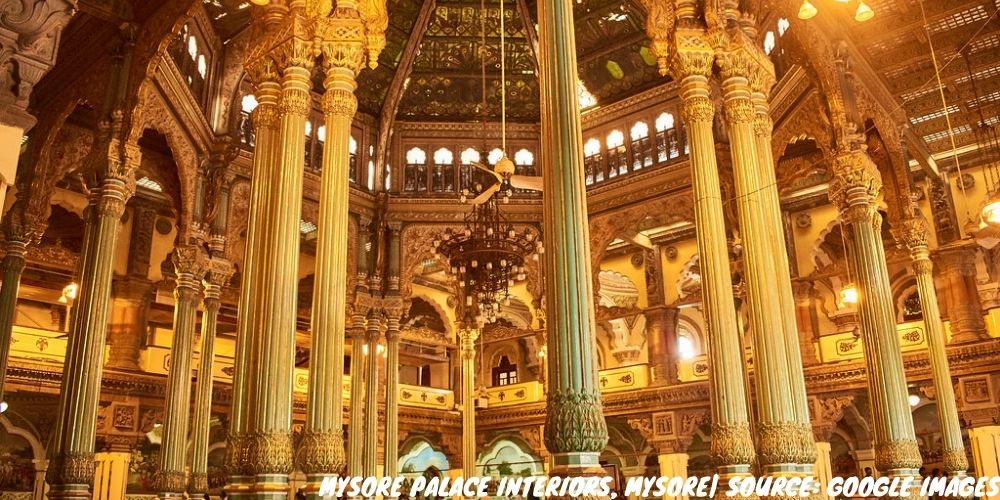 The Mysore Zoological Garden is a zoo spread over 167 acres and attracts over 45,000 visitors daily. It is home to over 1500 creatures with 168 varieties of bird, mammal, and reptilian species. Mysore zoo is loved by little children, and thus is an important place to visit in Mysore.

The wild animals conserved here include 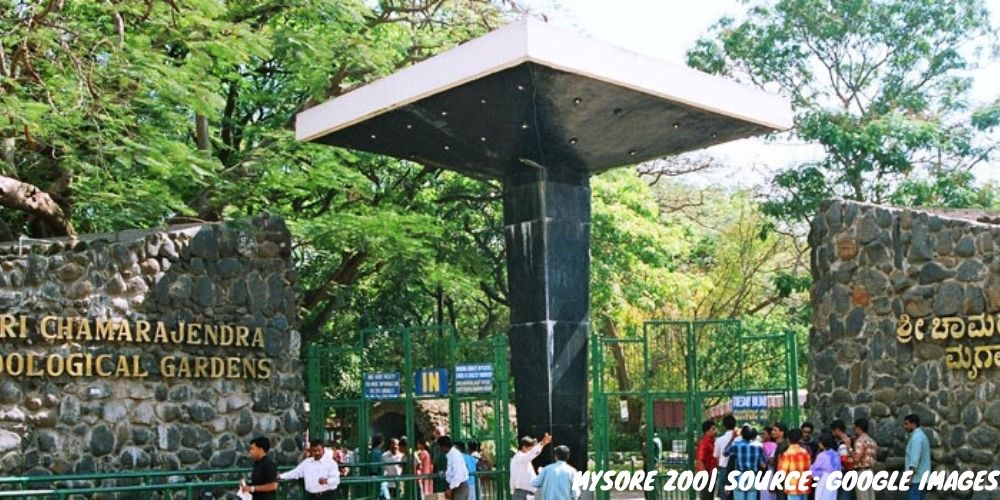 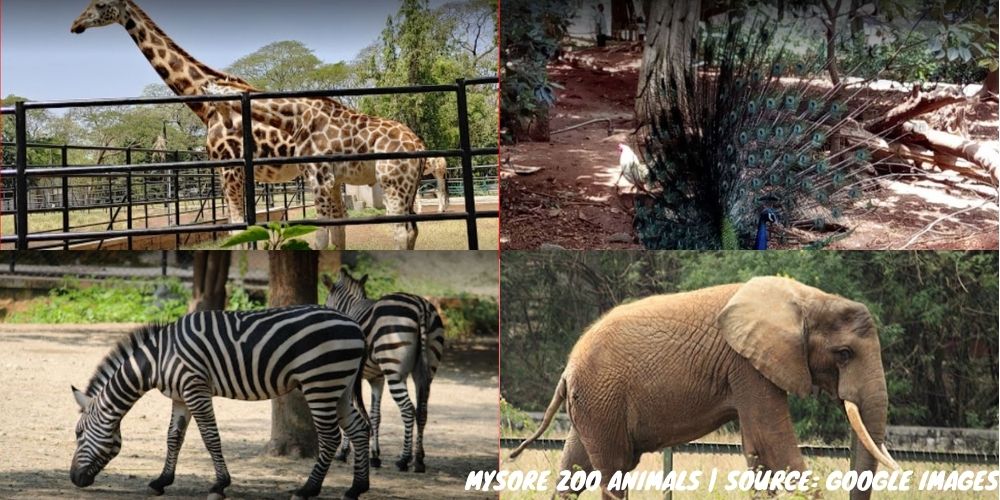 Srirangapatna is just off the Bangalore Mysore National highway. It is the epicentre of the fourth Anglo-Mysore war between the British East India Company & Tipu Sultan. Srirangapatna is an never to miss place to visit before visiting Mysore.

Srirangapatna was the place where Tipu laid his life fighting the British.  Tipu Sultan’s bravery is illustrated with many monuments to commemorate historical events leading to his ultimate death.

Tourists will love the city’s many attractions including the Srirangapatna Fort, Daria Daulat Bagh, and the Sri Ranganathaswamy temple.

Gumbaz is the burial chamber of Tipu Sultan and Haider Ali, Tipu’s father. The Jama Masjid built by Tipu Sultan has a small dome and is painted white. Sri Ranganathaswamy Temple is a beautifully carved temple complex dedicated to Lord Ranganatha, an avatar of Lord Vishnu.

The river Kaveri surrounds the temple in a divine embrace, adds to the beauty of the temple. Ranganathaswamy temple’s beautiful gopuram and intricate architecture make it a must-visit when visiting the town. 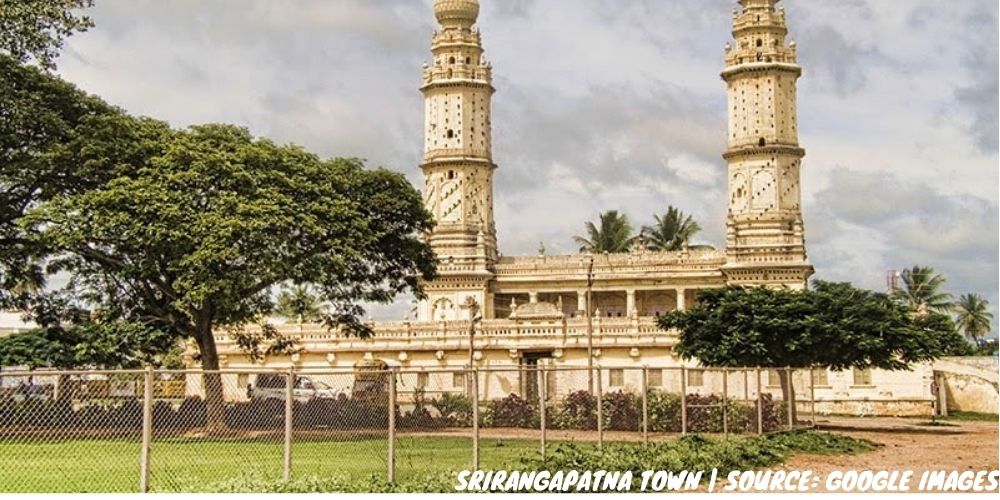 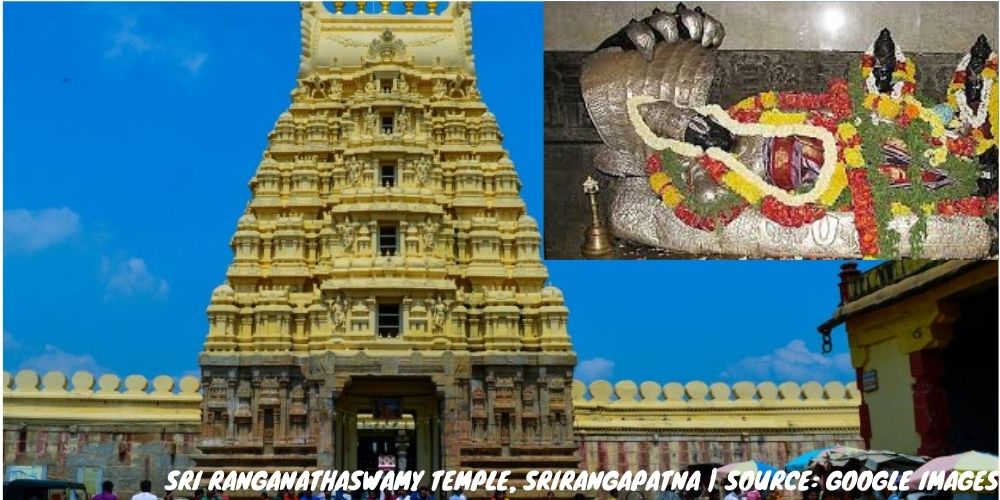 The Ranganathittu Bird Sanctuary is home to a wide variety of migratory birds. A joyful boat ride to catch a glimpse of these colourful birds in vibrant plumes is a favourite activity for tourists visiting the sanctuary.  It is a fascinating stopover, a tourist place near Mysore loved by nature-lovers.

Ranganathittue is the largest bird sanctuary in Karnataka; spread over 40 acres consisting of 6 islets of the Kaveri River. These islands consist of a trove of broadleaf forests, which attract migratory birds throughout the year.

Wild animals like the bonnet macaque, smooth coater otter, and mugger crocodiles visit these waters from time to time. Ranganathittu is open on all days from 6:00 am to 6:00 pm. An entrance fee costs just ₹ 50 per person. 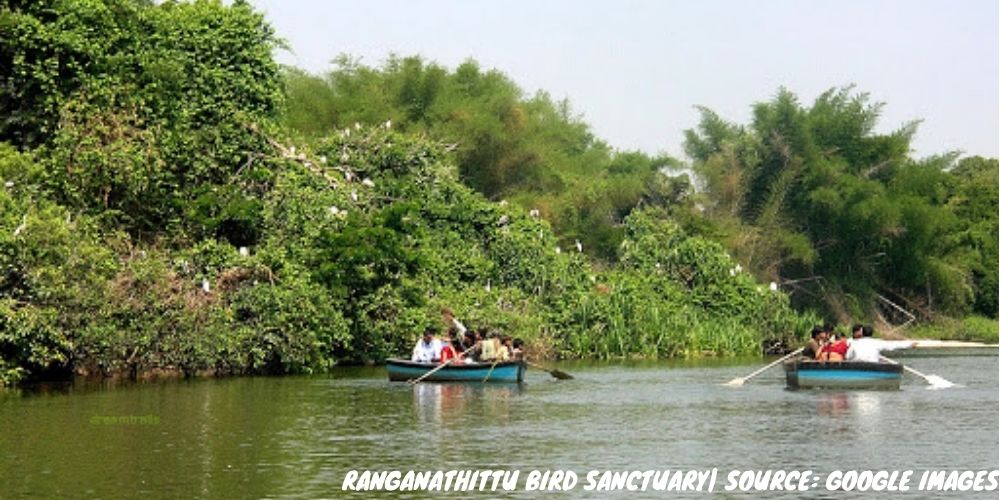 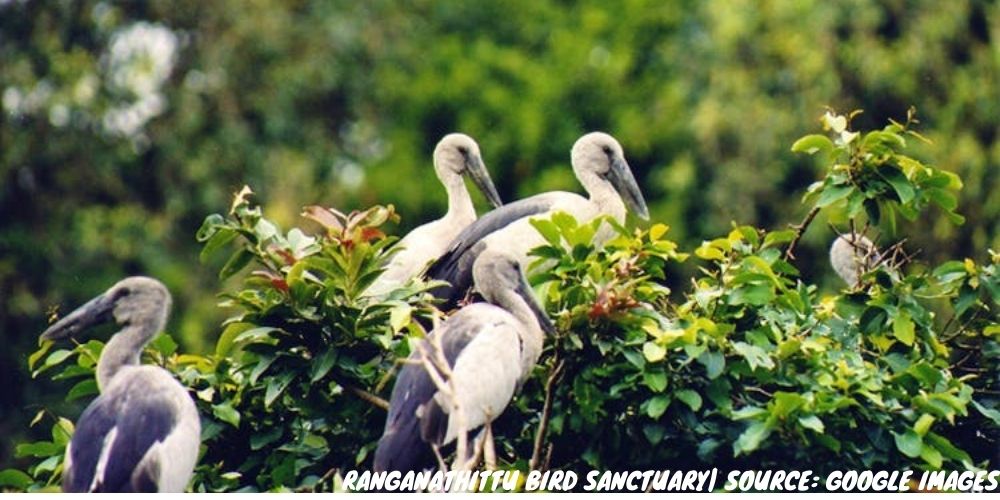 After enjoying the sights and sounds of Ranganathittu, it time to head to the Balmuri Falls. Balmuri falls is the place to be to enjoy a fun-filled time in the water. Visitors can have an enjoyable time playing in the water with family and friends. It’s a check dam across the Cauvery River creating a 6-foot water cascade that turns it into a holiday spot.

Balmuri’s lush green surroundings create an enjoyable environment for some fun in the water. The falls are free for all. It can be visited anytime between 8:00 am to 6:00 pm. 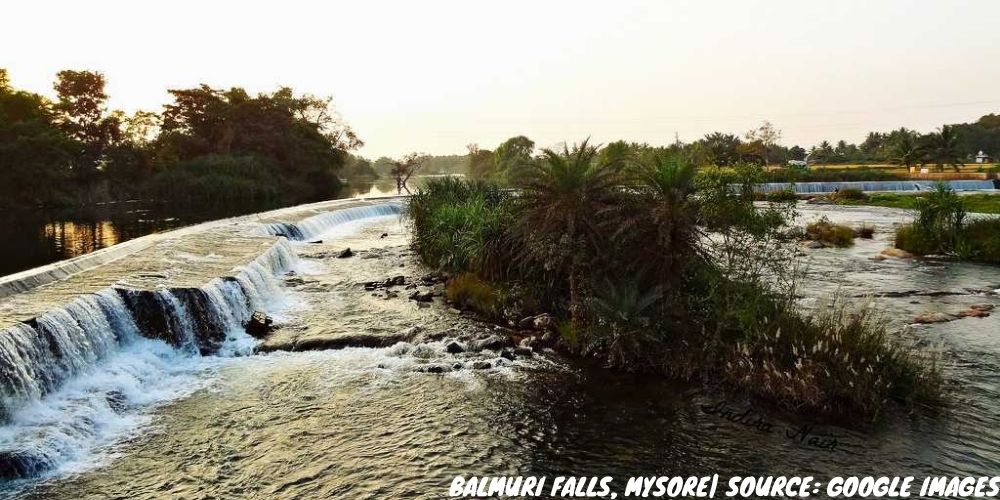 Daria Daulat Bagh is also called Tipu’s Palace. A well-maintained flower garden & monument in Srirangapatna town. A wooden palace set amidst a splendid garden & contains intricate architecture. It is a fascinating palace and a tourist place near Mysore.

The palace houses the Tipu Sultan Museum that exhibits many of the ruler’s belongings. Persian manuscripts, frescos & paintings are also on display at the palace. The palace is open all days from 6:00 am to 6:00 pm. An entrance fee costs ₹ 20 for adults. 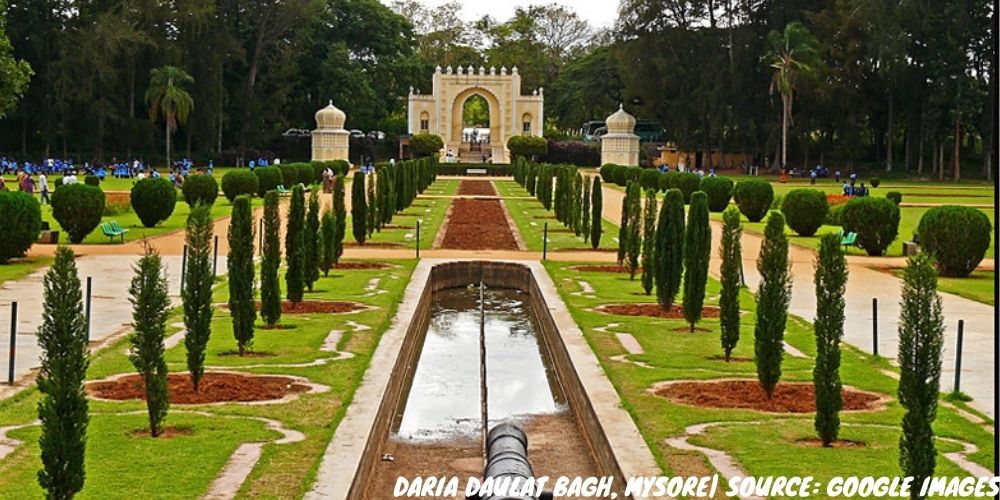 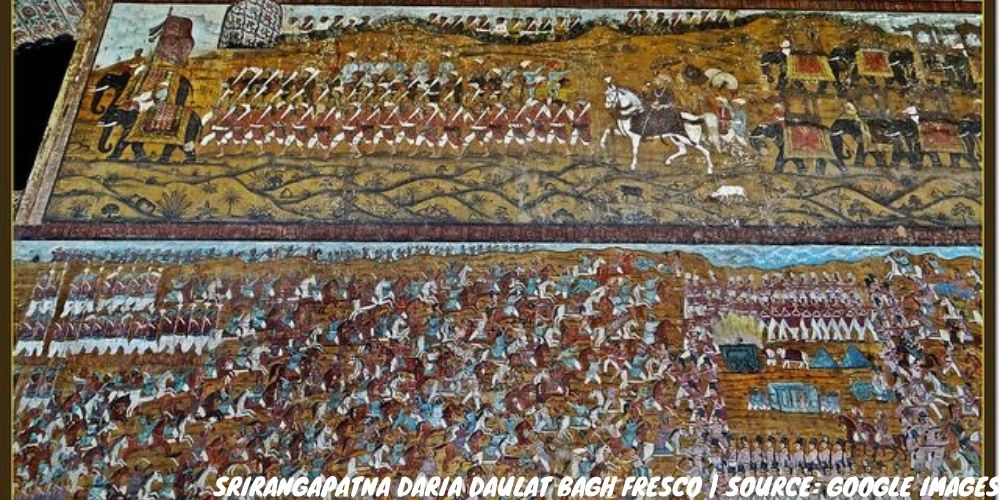 St Philomena’s Cathedral is a Catholic church constructed in 1936, using a Neo-Gothic style. It is inspired by the Cologne Cathedral in Germany. Scenes from the 1977 Hindi Bollywood Film Amar Akbar Anthony were shot inside the Church.

This large church complex can seat up to 800 people. Besides, stained glass windows depict biblical events like the birth, crucifixion and the resurrection of Christ. St Philomena’s is considered Asia’s second-largest church. The church is a place in Mysore loved by religious and the faithful.

Tourists can also take time out to visit Coorg for an extended holiday. Please check this blog on Coorg and its attractions 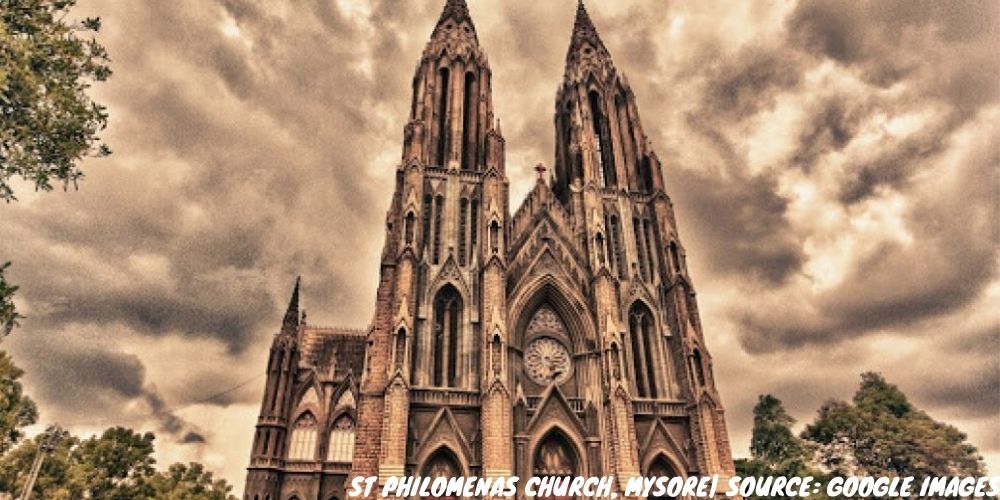 Jayachamarajendra Art Gallery displays a rich collection of artwork is an interesting place to visit in Mysore. It offers a peek into the world of the Mysore Royals and the days of a by-gone era. This art gallery boasts of preserving over 2000 paintings of celebrated artists from all over the world.  Works of Rembrandt, one of the greatest Dutch artists, are also displayed here.

Many styles of Indian painting like Mughal, Mysore, and Shantiniketan can found here. Raja Ravi Varma paintings are the key attraction to tourists to the art gallery. The monument is open all days from 8:30 am to 5:30 pm. An entrance ticket to the gallery costs ₹ 20 for adults. 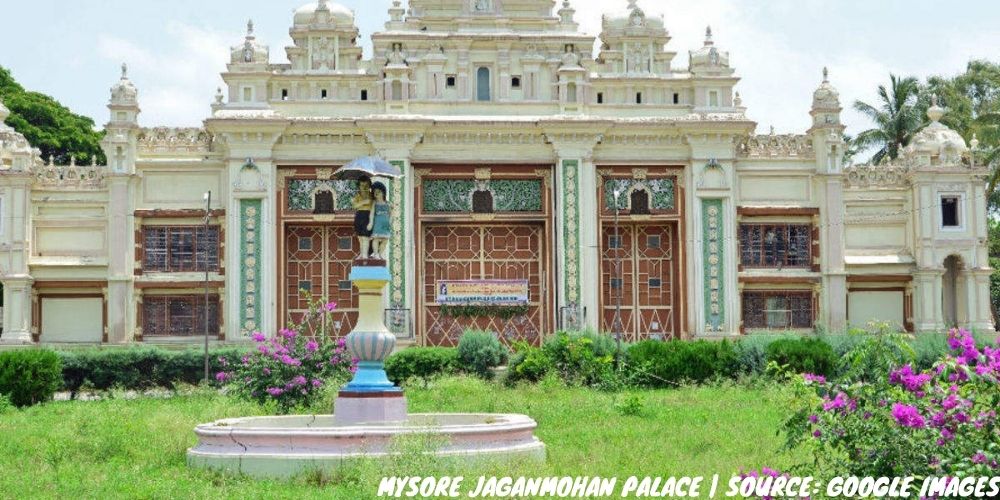 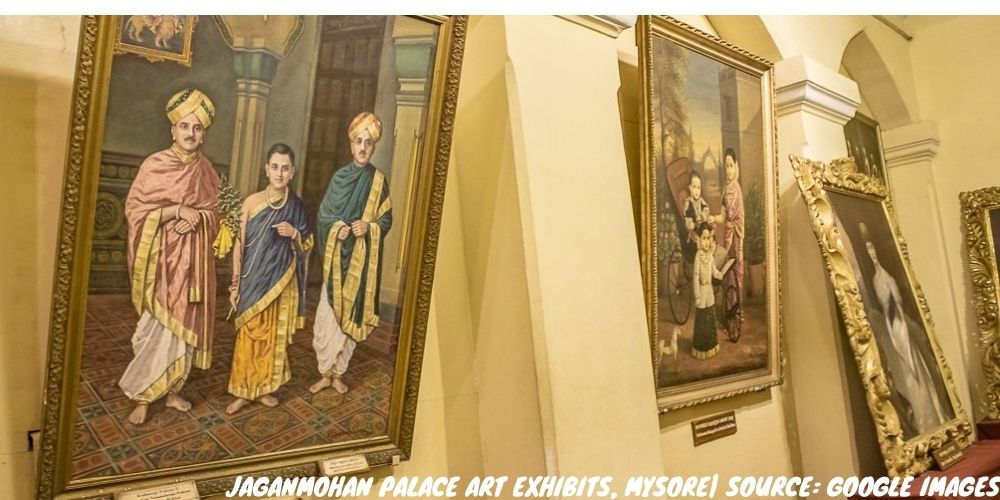 Chamundi Hills is the abode of Goddess Chamundeshwari, the presiding deity of the city of Mysore.  The Sri Chamundeshwari Temple at the summit is dedicated to Goddess Chamundi. Chamundi is a fierce form of Shakti.  Chamundi is the slayer of many demons like Chanda, Munda, and the powerful Mahishasura. The hills are a place in Mysore that is choc-a-bloc with devotees throughout the year.

The Chamundi hills are a protected forest area where many birds and animals thrive. It’s a vantage point from where visitors can view Mysore city from a distance. A motor-able road and a 1008 step pathway are the two means of reaching the Chamundi peak.

A key feature is the statue of Mahishasura bearing a sword in his right hand and a cobra in the left.  Chamundi temple’s sanctum is home to a sculpted depiction of Chamundeshwari. She is seated with her right heel pressed against the lowest of the seven chakras. This cross-legged yogic posture echoes the posture of Lord Shiva. Devotees are welcome to visit the temple on all days between 6:00 am to 9:00 pm. 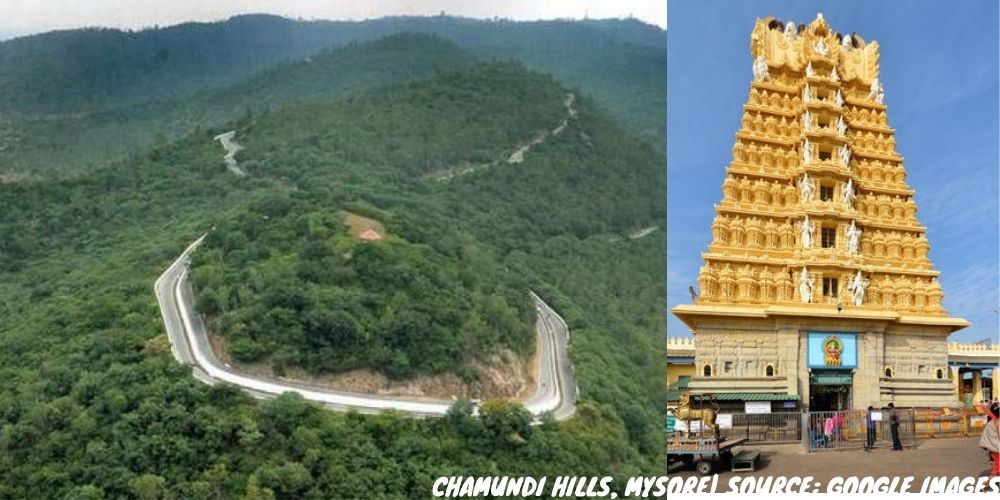 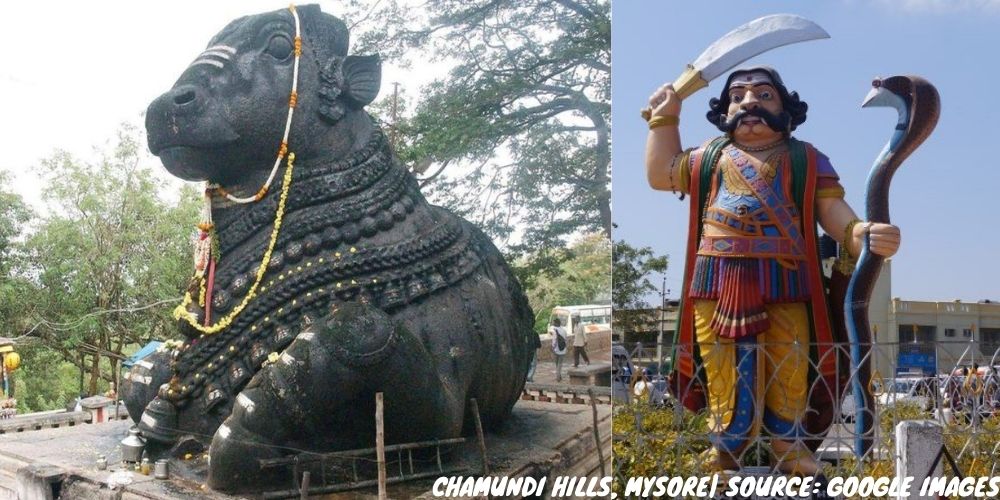 The Krishna Raja Sagar Dam is a popular tourist destination near Mysore, loved by both the young and the old. It is one of the most popular tourist places in Mysore. Built in 1924, it is one of India’s first civil engineering wonders. The dam provides irrigation and drinking water to the cities of Mysore & Bangalore.

The Brindavan garden beside the dam is a prime attraction famous. Tourists will enjoy its water fountains and the light & sound show. A boat ride around the grand fountain also a must-do activity for tourists. The dam is open all day from 6:00 am to 8:00 pm. Besides, the entrance fee costs just ₹ 15 for adults. 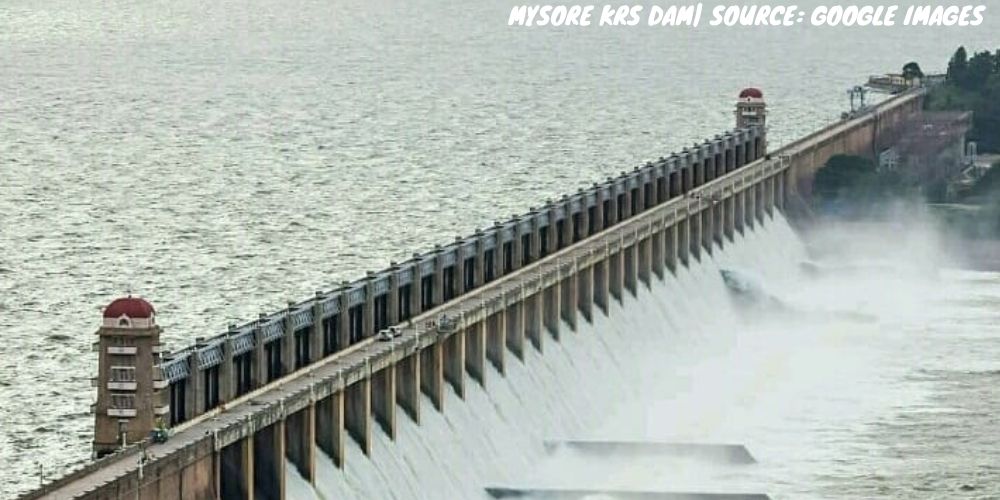 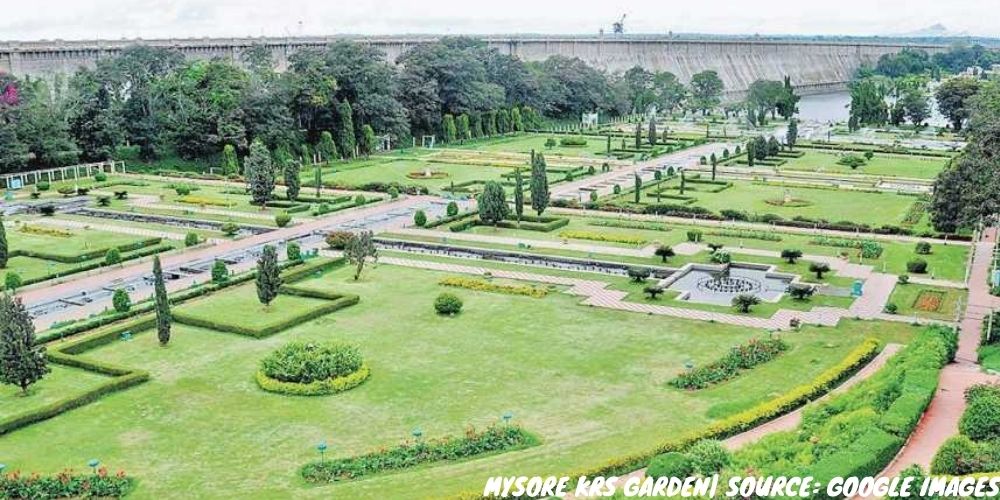 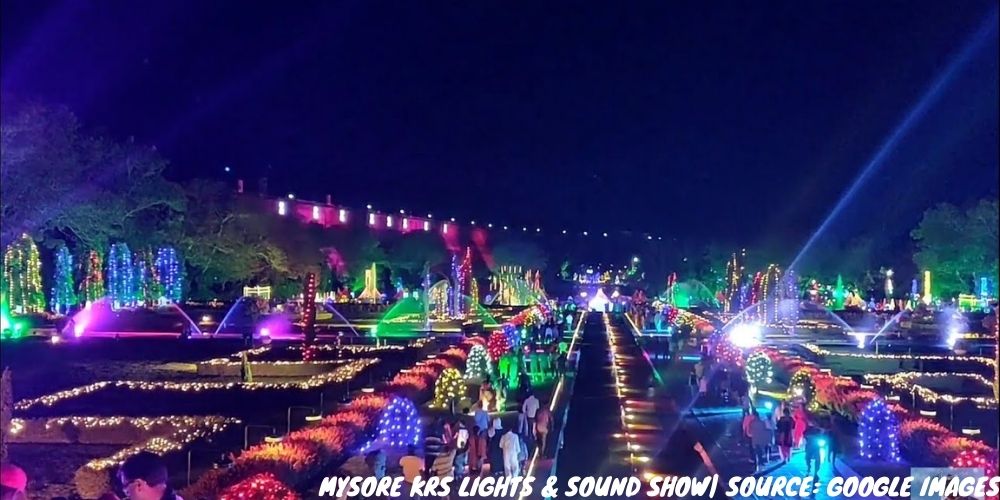 Check out these fascinating eat-outs when on a road trip to Mysore from Bangalore.

A tour of Mysore is incomplete without savouring Mysore Pak at Guru Sweets. Mysore Pak was an invention of Mandapa, the owner of Guru Sweets. It was created at the behest of Maharaja Krishnaraja Wodeyar. Guru Sweets is the must-visit place to visit in Mysore.

Guru Sweet’s version of the Mysore Pak is a simple recipe made of ghee, chickpea flour, and sugar syrup.  This sweet delight is sure delicious and will melt in your mouth. 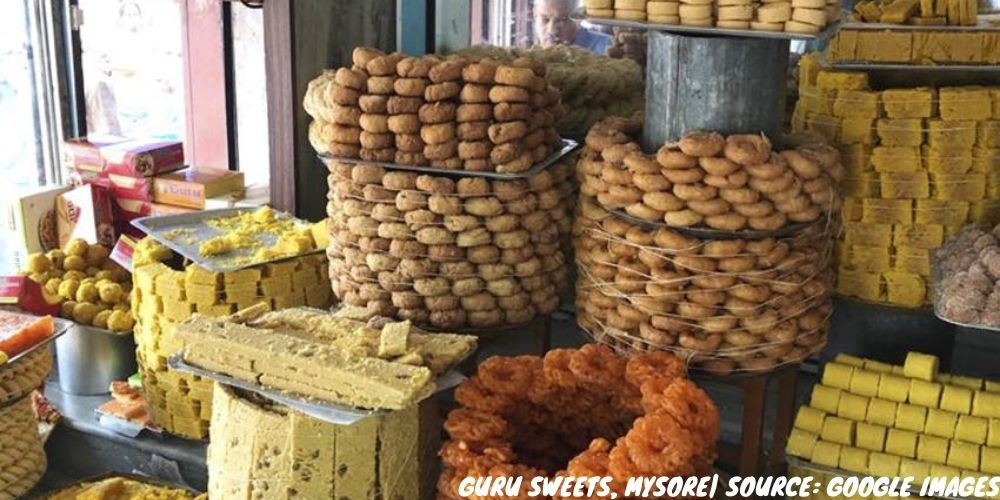 RRR Restaurant is famous for serving delicious vegetarian and non-vegetarian food. It’s a sought-after joint for foodies in love with Andhra-style Biryani. RRR is a vital tourist place in Mysore for serious food lovers.

Consistent taste, good quality food at reasonable rates means foodies don’t mind waiting in queue to savour these delectable specialities. The restaurant welcomes guests from 7:30 am to 11:30 pm all day. 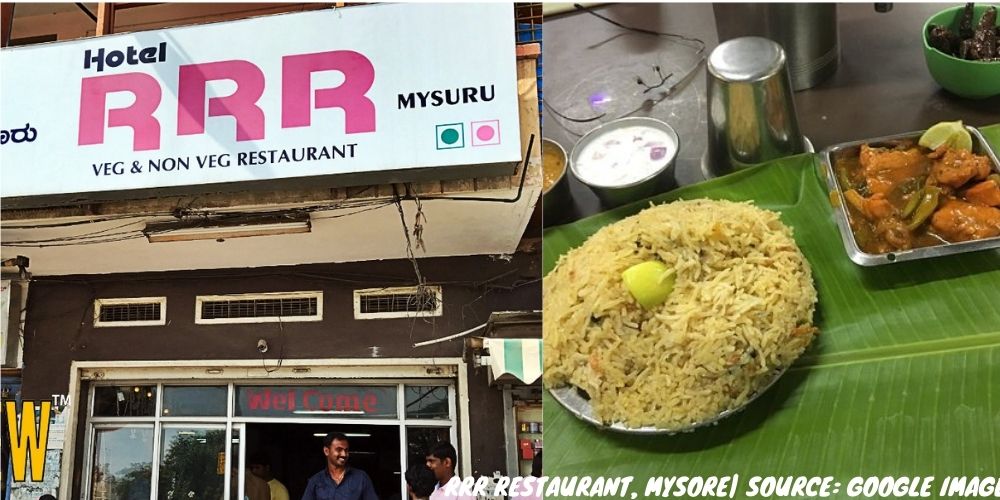 Hanumanthu Mess is the oldest and finest hotel in Mysore, famous for serving delicacies like chicken & mutton pulao. The mess is a delectable delight, foodies make it an important place to visit in Mysore.

The taste and quality of food served are consistent since all food is cooked by firewood. The tried and tested recipe ensures residents and tourists keep coming back for more. 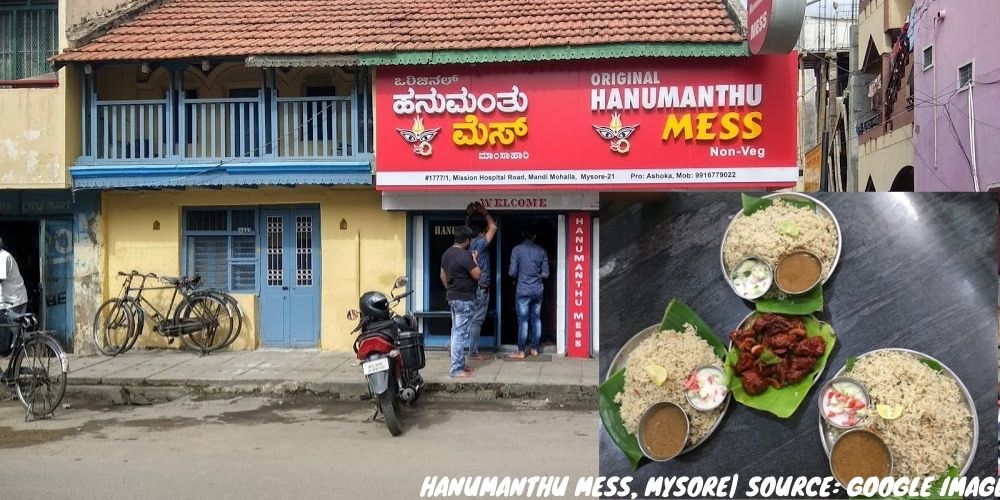 A Quick Road Trip to Mysore from Bangalore with Deepam Cabs

A quick hill station holiday from Bangalore is possible when travelling by Deepam Cabs. A taxi rental company from Bangalore. It has been helping people to enjoy splendid holidays with family and friends since 2005.

A Fantastic Road Trip to Mysore from Bangalore to cherish

Mysore invites its tourists with open arms. A fascinating road trip to Mysore from Bangalore is a perfect alibi for every weary city dweller.  Bangalore residents will reminiscent their school days and the good times they had with friends on a school holiday to Mysore.

Enjoy a fascinated holiday by visiting the magnificent Mysore Palace. Watch migratory birds at the Ranganathittu Bird Sanctuary, Enjoying a fun-filled time in the water at Balmuri Falls. Be spellbound by the sheer magnitude of the KRS Dam.

Being amazed at the grand and opulent lives of the Mysore Royals by watching the exhibits at the Jagmohan Art Gallery. Besides, savouring local delights at the RRR restaurant and Hanumanthu mess is a never-to-be-missed opportunity. The sweetness of the tourist places in Mysore is incomplete without a bite of the delicious Mysore Pak at Guru sweets.