Yelagiri is a peaceful and serene hill station that is popularly called the poor man’s Ooty.  It’s called so as the prices of accommodation, sightseeing are cheaper when compared to other hill stations in Tamil Nadu. Yelagiri abounds with spectacular green valleys, rose gardens, and orchards. A Yelagiri Hills Holiday is a visual delight and can be undertaken on a shoestring budget.

Yelagiri is mineral-rich and has an abundant supply of water throughout the year. Vitamin-rich crops such as samai, ragi, coconut, groundnut, and paddy are grown in the Yelagiri Hills. Yelagiri was first inhabited about 400 years ago. It is a common belief that soldiers from Tipu Sultan’s army settled here to later become agriculturalists.

Interestingly, Yelagiri was a private property belonging to a powerful Zamindar family during the 1950s. The Government of the time took possession of the land and developed it into a verdant hill station.  Tourists can also visit the residence of the Zamindar family in Reddiyur. Tribal groups who reside in the 14 villages in the hills form part of the Yelagiri demographic.

Yelagiri is surrounded by the Palamathi hills, the Swamimalai hills, and the Javadi hills to form a tight embrace. The Yelagiri hills have many tourist places to explore as the verdant hills create a visual vista loved by all. It is a perfect holiday destination for families, peace-seekers, honeymooners, and adventure enthusiasts alike.

The distance from Bangalore to Yelagiri is just 170 km. This means a road trip can be covered in 4 1/2 hours time. The ascent up to the Yelagiri Hills is the exciting part of the trip. Negotiating 14 hairpin bends from Ponneri Road to Yelagiri offers some mesmerizing views of the green Yelagiri hills. The rides can be exciting but caution needs to be taken when traversing her narrow roads. 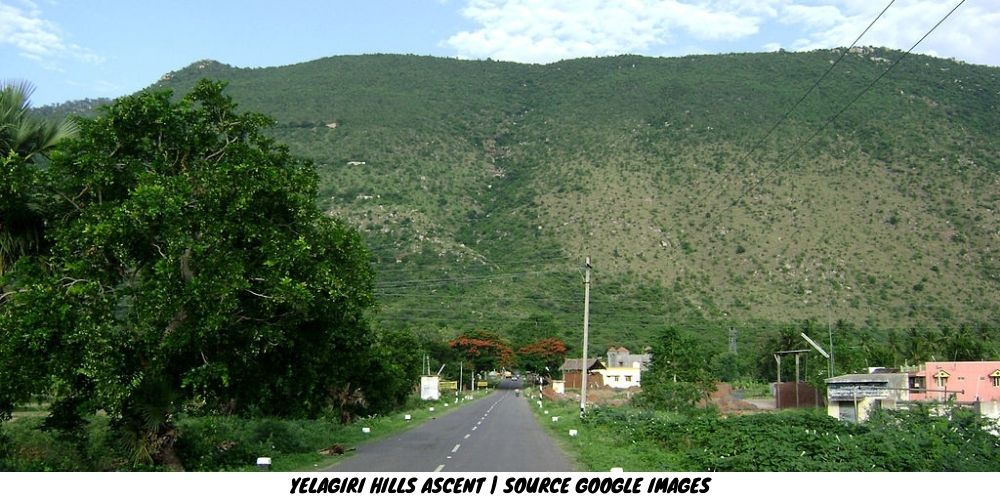 Yelagiri can be reached by flight also as the Bangalore International Airport is just 190 km from here. The nearest train station is the Jolarpettai Junction that is 21 km from the hills. Tourists can plan a short one day trip from Bangalore. They can also opt for an extensive two day trip to the Yelagiri Hills. 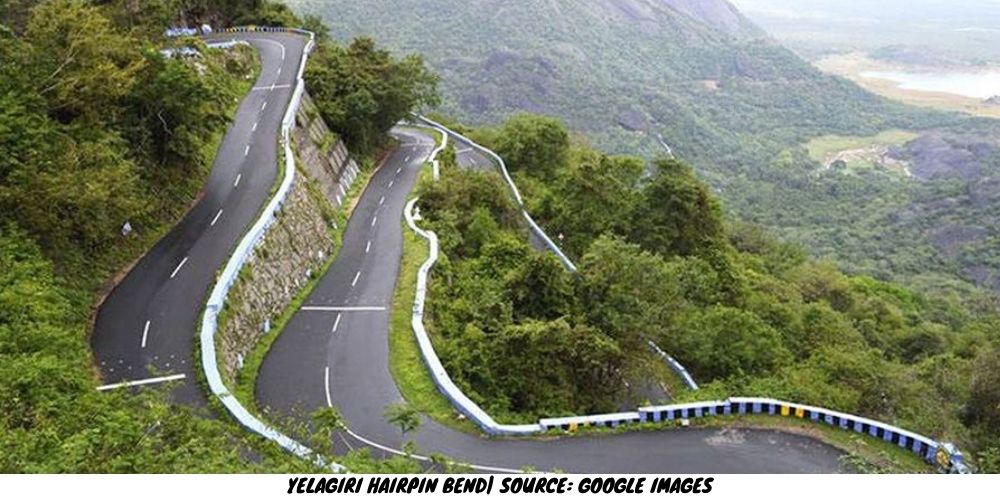 Top Places to visit during a Yelagiri Hills Holiday.

Yelagiri abounds with magical tourist delights waiting to be discovered on a low budget. Here are 10 tourist places in Yelagiri recommended for tourists from Bangalore. One can discover all these places while planning a taxi-based holiday with Deepam Cabs.

Punganoor Lake is an artificial lake situated at the centre of the Yelagiri Hills. A nature park built around the lake is a key attraction for tourists visiting Yelagiri.  The boat club here offers pedal and motorboat rides at nominal rates for tourists. Besides, a children’s park, a small treetop view and a few shops selling novelties are the other attractions. Children can enjoy the swings, slides, and other games installed here.  The lake is the first tourist place to start a Yelagiri tour. 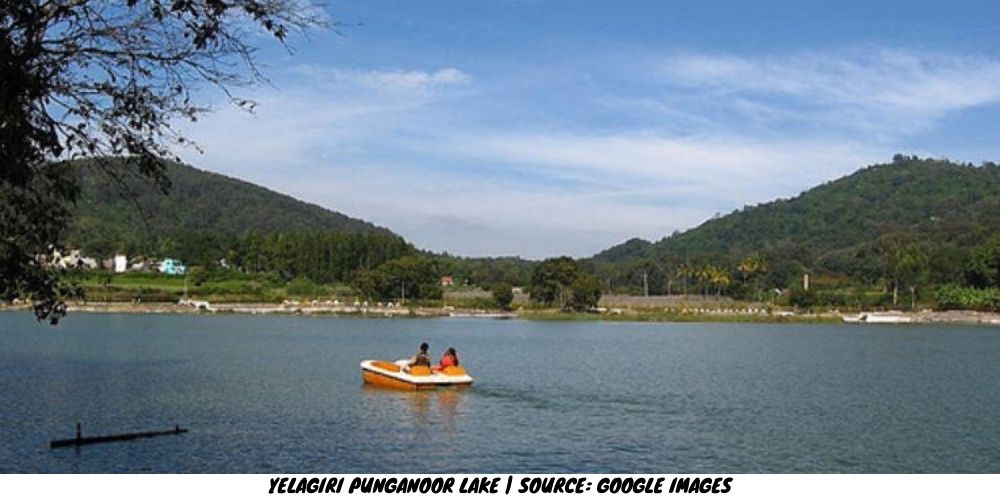 Punganoor Lake is a visual delight that includes a boat ride. Clubbing a visit to the Nature Park is a nice way to spend a good time with family and friends.

Nature Park, spread over 12 acres, is just 1 km from Punganoor Lake. Several species of plants that can grow on rocky terrain are planted at the park.  The nature park has many attractions for children like a musical fountain, a seasonal garden, and a bamboo house. Punganoor Lake along with Nature Park are the most visited tourist places in Yelagiri. 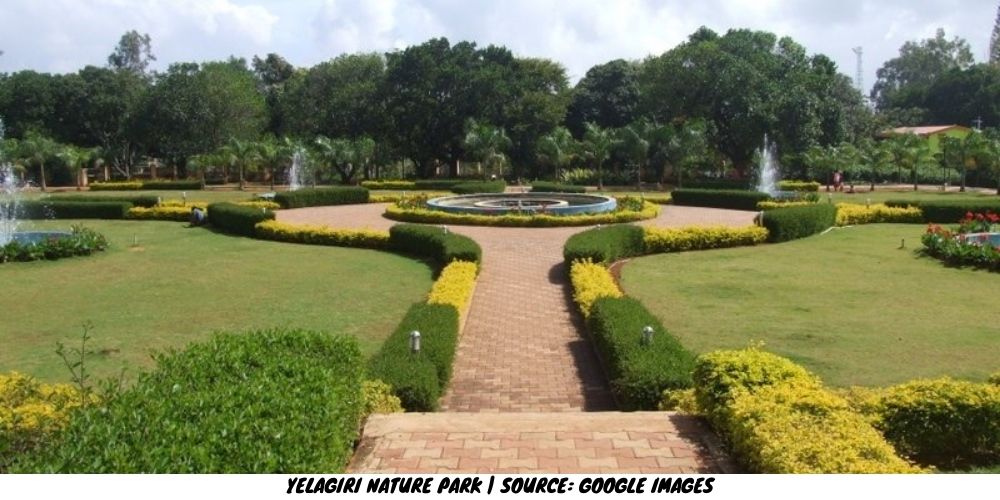 The musical fountain comes to life at 7:00 pm every day with colourful lights and a sound show. A fish aquarium here has a variety of fish and tortoises on display. The rose garden and artificial waterfalls are also worth a visit. 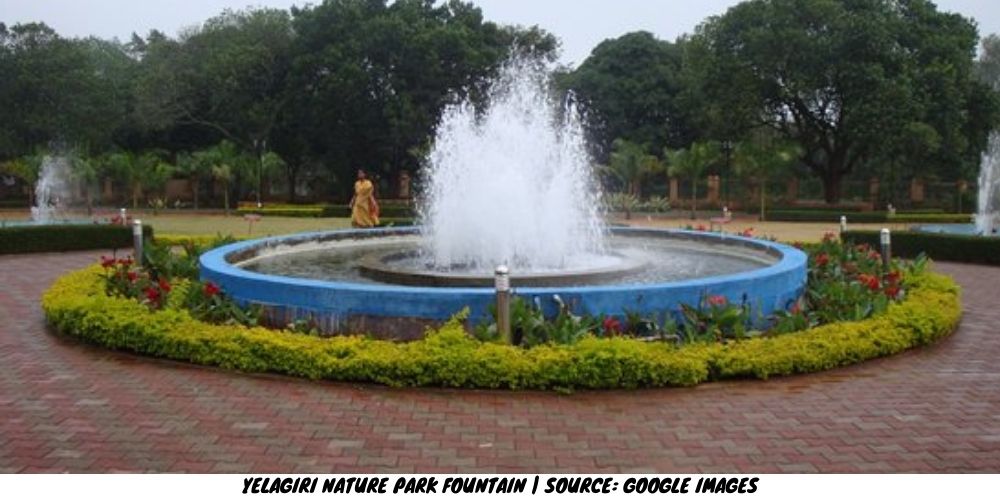 While parks at Yelagiri offer a visual retreat. The Yelagiri Telescope observatory offers a vista by gazing at the skies.

The Vainu Bappu Observatory near Yelagiri is managed by the Indian Institute of Astrophysics. The observatory is a must-visit for all Astrology enthusiasts.  Besides the green surroundings, the observatory is inside a 100-acre forest land. In fact, wild animals like deer, snakes, and scorpions can be sighted here. 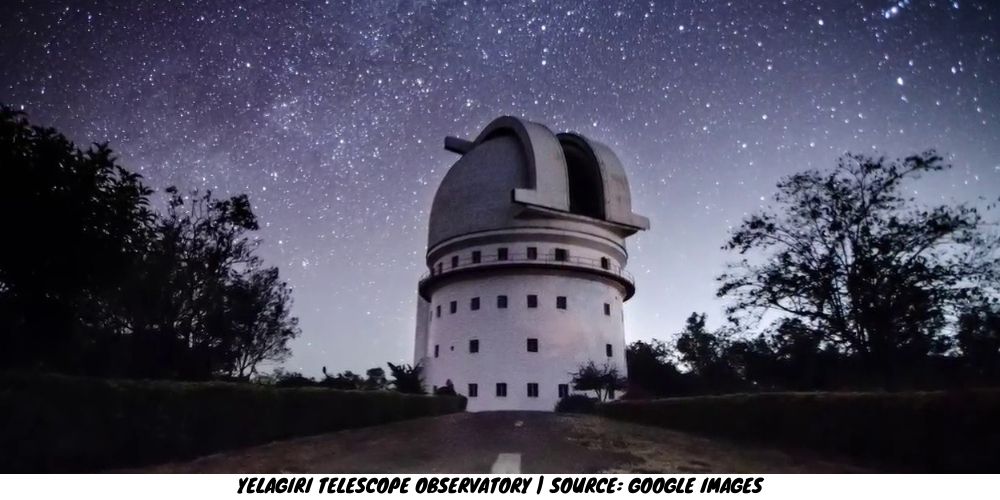 A high-precision telescope here has carried out deep-sky observations since 1970. The telescope is so powerful that it can resolve a 25 paisa coin kept forty kilometres away. Telescopes here are associated with two unique discoveries in the solar system.

The presence of Jupiter’s satellite Ganymede’s atmosphere was detected here in 1972.  In 1977, it participated in the observations that confirmed the existence of rings around the planet Uranus. The Yelagiri Observatory is an interesting tourist place in Yelagiri that needs careful planning before visiting. As it is not open to tourists on all days. 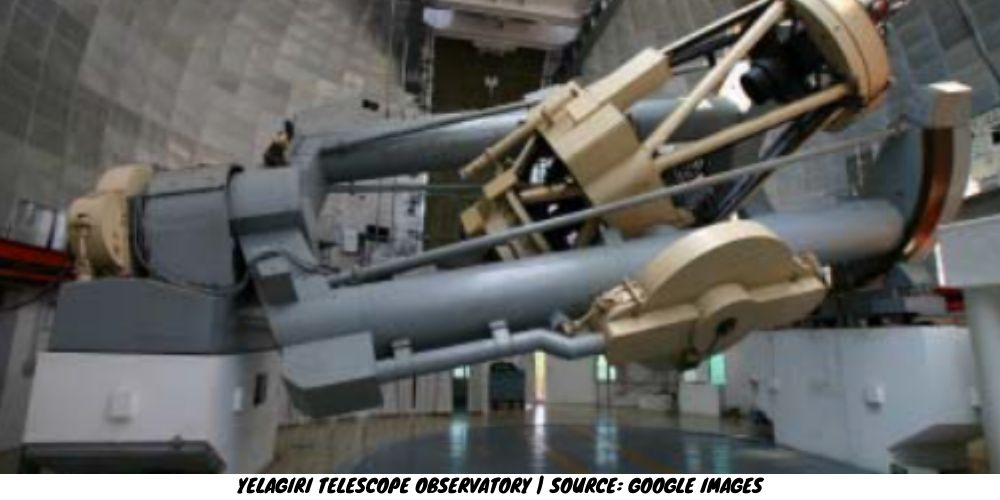 If the skies don’t fascinate you. Then a visit to Lord Murugan’s Velavan temple must be on everyone’s itinerary who are spiritually inclined.

Velavan Temple is a beautiful temple constructed in 1964. The temple is just 400m from Punganoor Lake and one of the must-visit places in Yelagiri.

A separate shrine for Lord Ganesha at the Velavan hillock is an added attraction. A statue of the mythological character Ghatothgajan in a standing posture is the highlight of the temple. 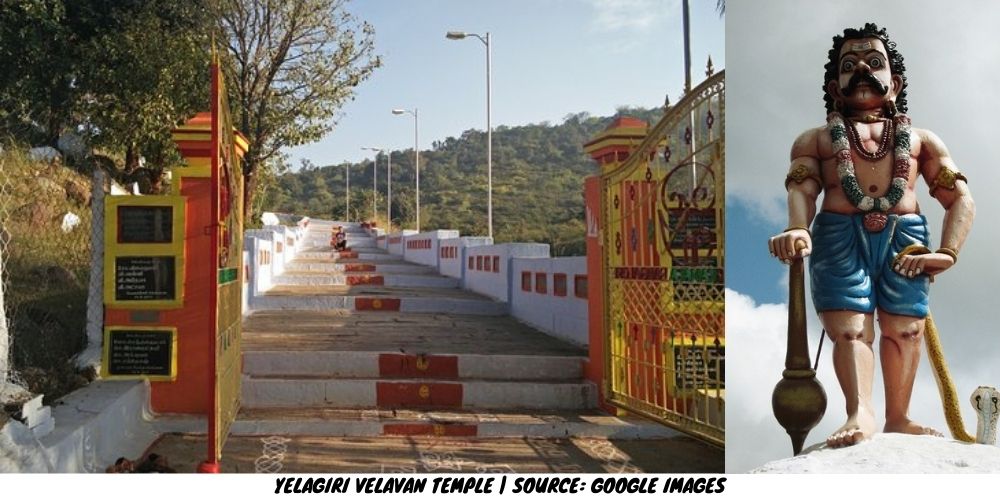 Statues of Lord Murugan and Goddess Valli in the form of Kuruvan & Kurathi are venerated here. The temple’s yearly festival during the Tamil month of Adi draws devotees in the thousands. Velavan temple is open to devotees on all days from 6:00 am to 8:00 pm. 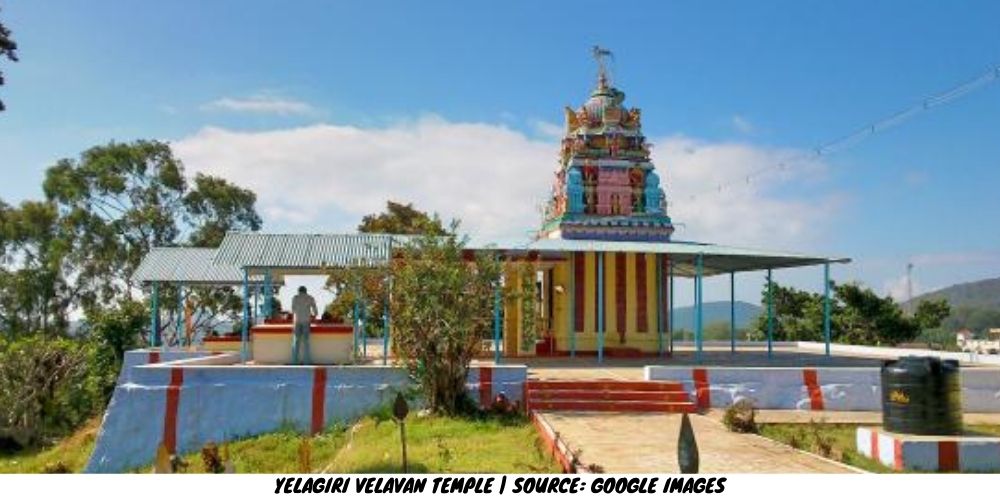 Velavan temple is for all the spiritually inclined. But, Swamimalai hills are for all adventure enthusiasts eager for an adrenaline-filled adventure.

Swamimalai’s moderate 3 km trek starts from the Punganoor Lake. It leads tourists to the highest point in the Yelagiri hills. Swamimalai Hills is one of the best tourist places in Yelagiri, offering a visual treat with scenic vistas and a fantastic view of the hills from the summit. 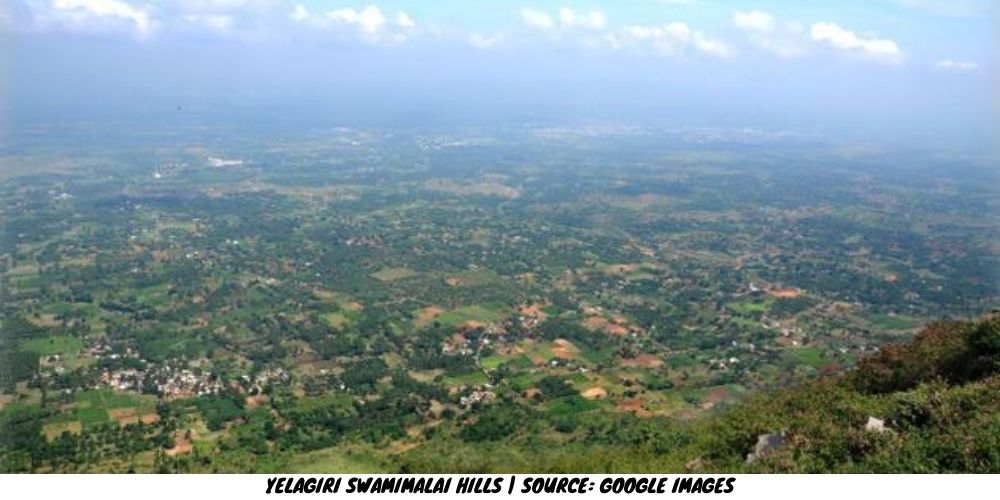 The candid view of the valley’s rich landscape with abundant greenery are worth the trek up the Swamimalai hills. Tourists can start the ascent early in the morning to enjoy a splendid trekking experience.

Holiday Makers will also love a tour of the Yercaud hills. Please check the blog on Yercaud & Its Delights. 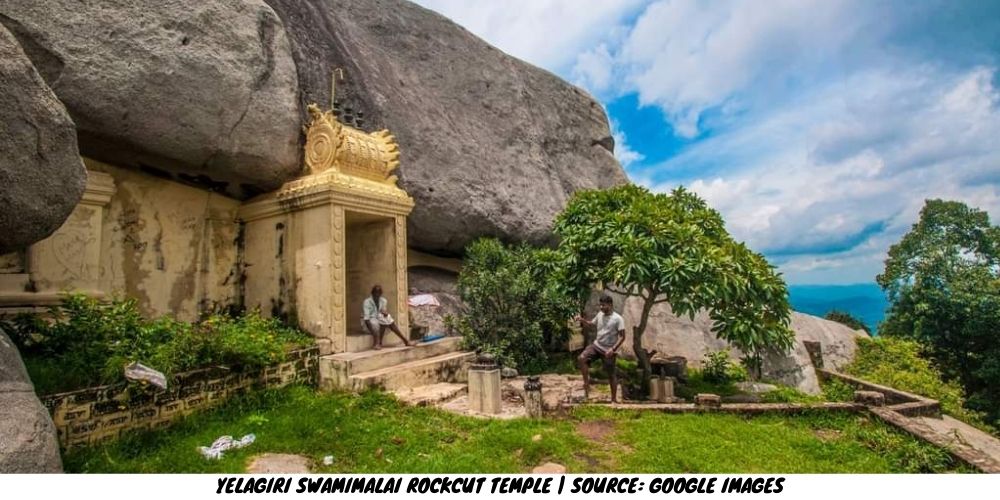 Nilavoor Lake along with the Punganoor Lake is an enchanting visit in Yelagiri.

Nilavoor Lake is a tranquil water body; with a pleasant climate and scenic surroundings. It is one of the most fascinating places to visit in Yelagiri.  Flanked by a beautifully decorated garden and swaying trees, a boat ride on the Nilavoor Lake is a perfect way to enjoy some quietude. It is the best place to experience a breath of fresh air in the hills. 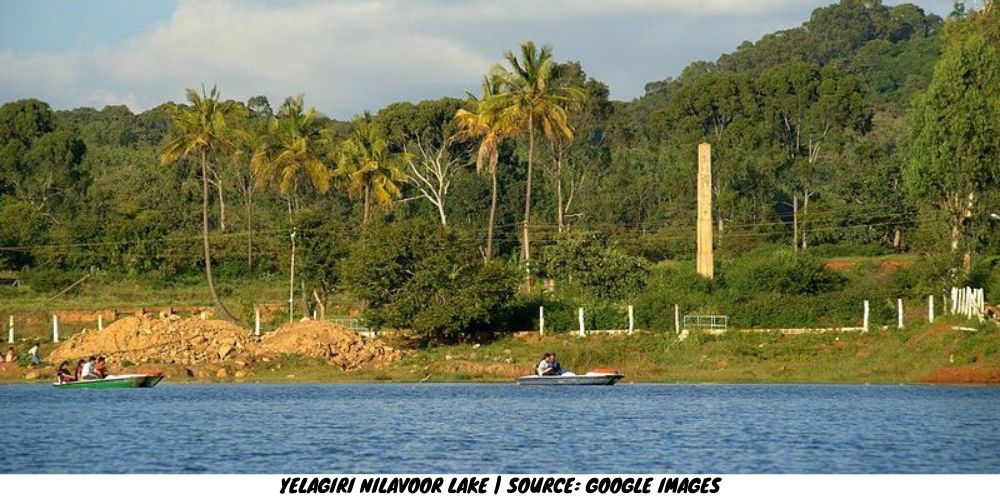 Witnessing a scintillating sunrise and an enchanting sunset is a romantic way to enjoy quality time with loved ones at the lake. 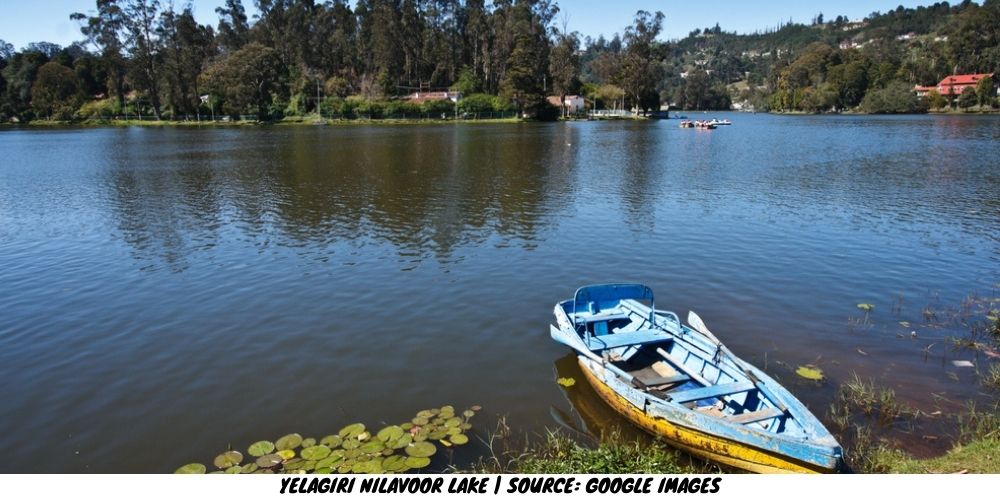 If Nilavoor Lake is calm and serene. Yelagiri’s Rose Garden is for all gardening & horticulture enthusiasts.

The Yelagiri Rose garden is amongst the exotic tourist places in Yelagiri.  A vast collection of exotic flowers and fruits are a visual treat for any visitor to the garden. 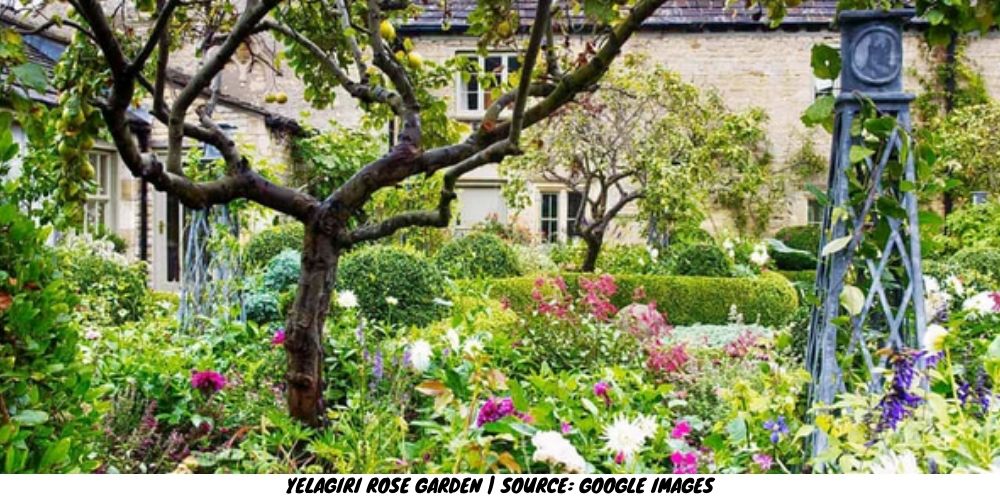 Several waterfalls fed by natural springs add splendour to the exotic garden. Rose Garden is well maintained, a stretch of land filled with tropical and exotic flowers. The park charges an additional fee when visiting with a camera. 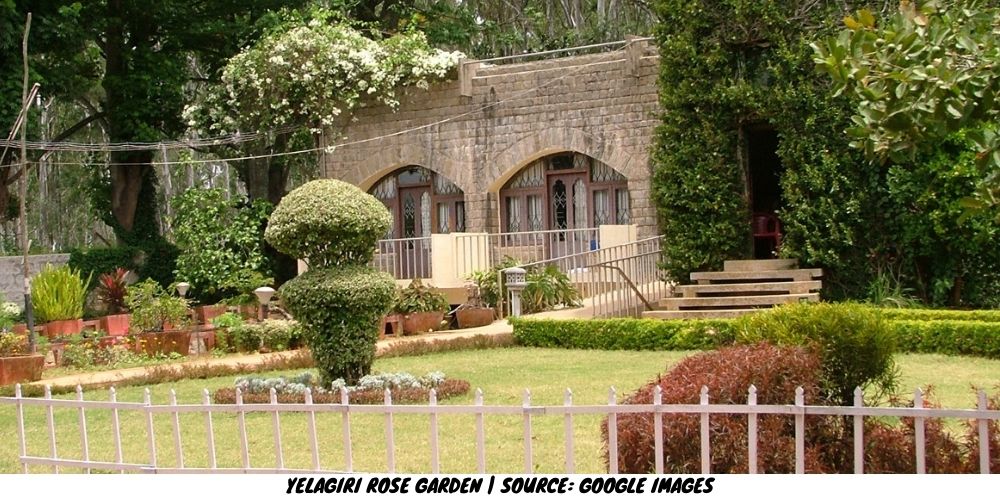 While Fundera Park might charge visitors an entry fee, it is worth every buck spent here.

Fundera Park is a unique park that is a sanctuary for rare birds. It is a privately maintained park and charges an entry fee of ₹ 300. The attractions for tourists here are the bird park, a petting zoo, and a 7D cinema screen.

The birds are not caged, which is a refreshing change for visitors. Fundera Park is a newly developed tourist place in Yelagiri that invokes special interest among tourists. 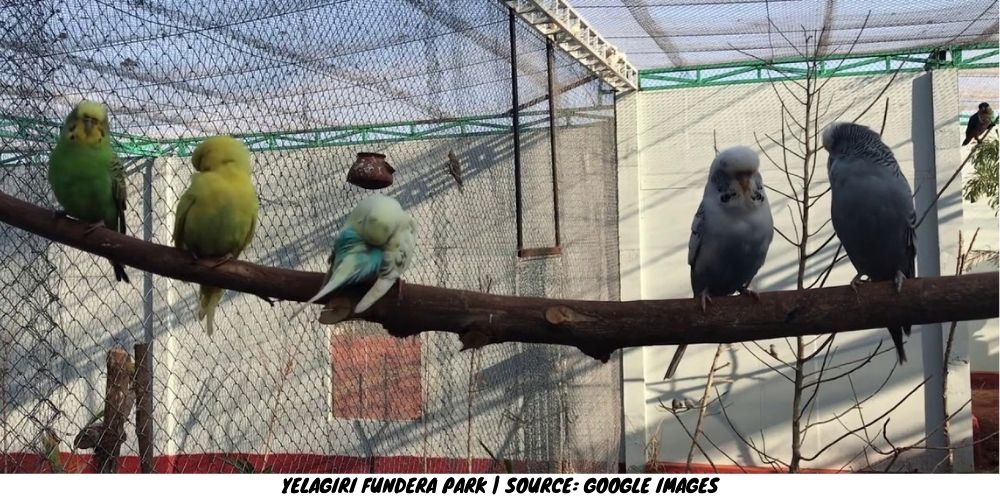 The key attractions at Fundera Park are the over 300 exotic birds, a private guided tour, an opportunity to feed the birds, and the 7D cinematic experience.

A small eatery within the park serves tourists a quick bite. Snacks, condiments, tea, coffee, and cold drinks can be purchased at nominal prices.  Fundera park is a favourite tourist place in Yelagiri, especially for animal lovers. 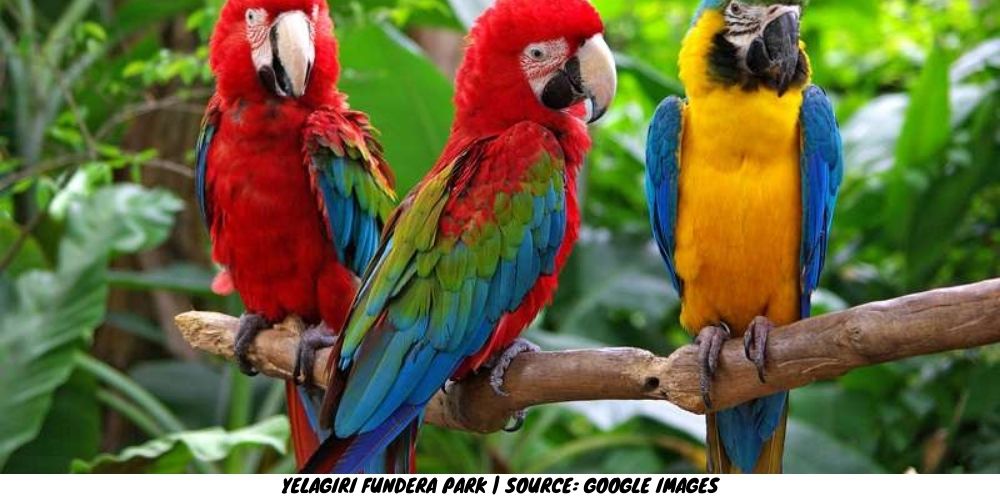 Yelagiri’s verdant hills make way for the beautiful Amrithi Zoological Park and are ideal for a resplendent nature walk.

Amrithi Zoological Park is a zoo near Yelagiri and is one of the famous tourist places in Yelagiri. The park built in a protected area spread over 25 hectares. Amrithi Forest is rich in flora and fauna. Besides, animals sighted here include spotted deer, mongoose, hedgehog, foxes, tortoises, and crocodiles. 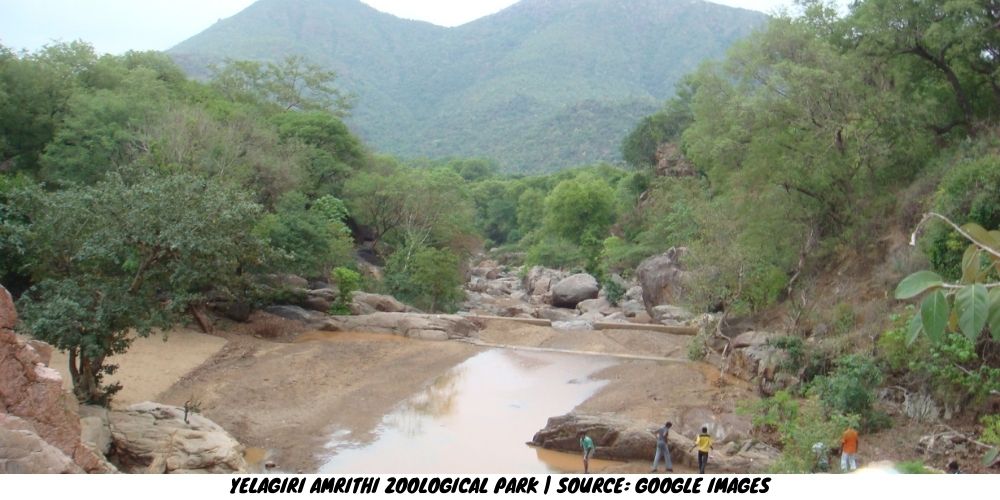 A 1500 meter long trek into the park helps tourists experience a panoramic view of the lush green forest. The waterfalls within the park are seasonal. It attracts visitors when clear and refreshing water gushes down from the surrounding hills during the peak season. 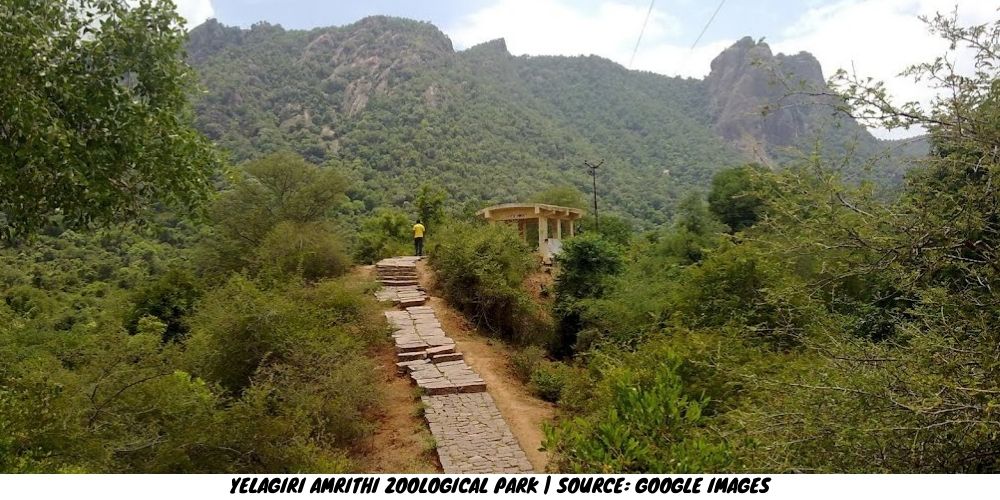 If spending time enquiring about rare medicinal herbs is your kinda thing then visiting the Yelagiri Herbal Farm is highly recommended. The herbal garden is a fascinating place to visit in Yelagiri.

Yelagiri’s Herbal Garden is home to an extensive collection of rare herbs. These plants are used in traditional Siddha and Ayurvedic medications. A visit to the Government Herbal Farm will showcase the abundance of herbs found in the hills. The gardens are a unique tourist attraction in Yelagiri. 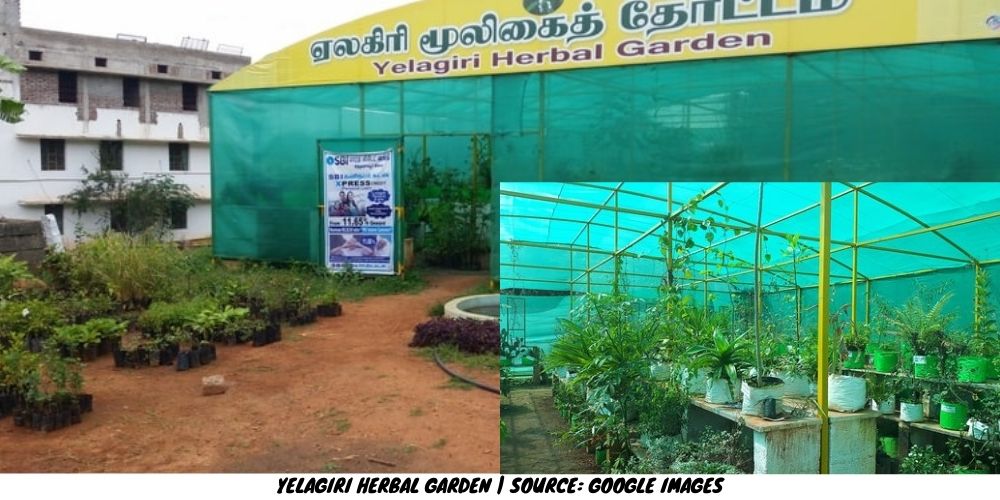 The park attracts a lot of tourists for the exquisite green garden of medicinal herbs.  There are a variety of trees and plants that bloom and bear fruits. A walk along these gardens helps to soothe the senses with aromatic herbs and luscious fruits.

A Delightful Yelagiri Hills Holiday Awaits Everyone from Bangalore

It’s that time of the year to pack one’s bags and head to Yelagiri to escape the sweltering Bangalore heat. A delightful holiday to Yelagiri awaits every tourist from Bangalore. We have covered the best about Yelagiri, things to do & places to explore at the Yelagiri hill station.

A Yelagiri road trip from Bangalore is easy when travelling by Deepam Cabs. It is up for any travel challenge from a deep valley to the loftiest hills. Tourists can book either one way or two-way cabs from Deepam Cabs at affordable, and reliable prices

The best way to describe a Yelagiri Hills holiday is simple and very light on the pocket. The top tourist places in Yelagiri are easily accessible and usually open throughout the year. A planned holiday to the Yelagiri Hills from Bangalore should include the following.

Being able to spend quality time with loved ones by visiting the Punganoor & Nilavoor lakes. A quiet boat ride is a simple delight worth every buck. Enjoying a wonderful time at the Nature Park and taking a trekking challenge at the Swamimalai hills is a great idea.

A trip to the Yelagiri hills is sure to delight everyone when planned well. In fact, it can be more enjoyable when in the company of close friends and family. A novel way to wind up a Yelagiri Hills holiday is by savouring local delicacies and by shopping for novelties at the many tuck shops in the hills.